Hello. Thank you for being here.

I’m on the great journey just like you. I get stuck too.

I am no guru. I simply have a knack for helping others heal themselves.

For over 20 years, I’ve been holding space in one way or another. It would be my honour to hold space for you.

I have been involved in health and wellness for over 20 years. I have taught martial arts, owned a gym, coached business owners, practiced as a clinical hypnotherapist, and more.

Currently, I am continuing studies in breathwork, Compassion-Focused Therapy (CFT), and meditation.

I am interested in neo-shamanic practices, Eastern philosophy, and altered states of consciousness.

I hold a brown belt in BJJ, and I play bass in my bedroom. 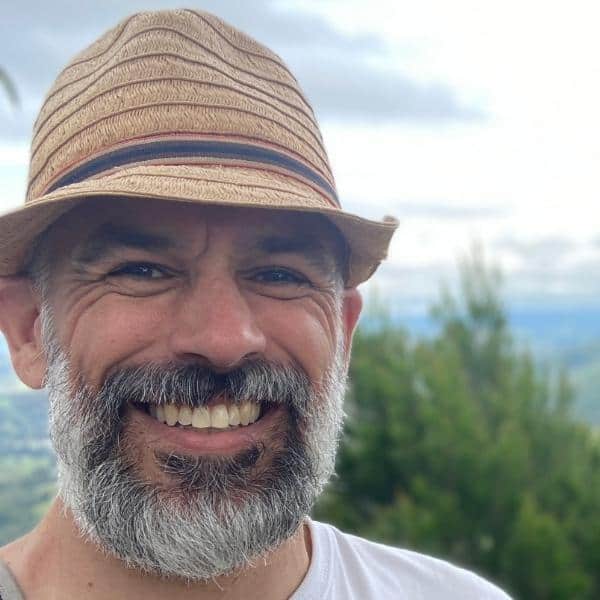 “Adam has a calm and measured approach to his practice. He instills a trust and faith in his clients that enables them to receive what it is they are meant to during the session. An inner wisdom and abundance of life experience are conveyed in his practice, highly recommended.”
Glenn S.
explore healing services
explore men's work

When I was a kid I almost died. I had severe asthma. On numerous occasions I was rushed to the Royal Children’s Hospital by ambulance. It wasn’t a fun time. As I grew a little older I was told to avoid playing sports because my lungs were too weak. I got a lot of advice that didn’t really help. No one taught me how to breathe. I had to teach myself that. I started investigating breathwork at a very early age.

Fast forward a few years and I had my first taste of the martial arts. I studied judo at the local community hall. It cost a dollar or two per class. I loved it. To this day, I don’t know why my parents stopped taking me. I started playing Aussie rules football at the same time. And wouldn’t you know it, the asthma was not a problem. My lungs got stronger with the exercise.

By the time I reached my teens, I’d been told so many times that I was sick and weak. I wasn’t the most confident young man. On the outside, I looked confident. On the inside, I was unsure, scared, and massively self-critical. And I was angry. I didn’t have a huge circle of friends and I felt self-conscious around all those young women I was attracted to.

When I reached that mythical age of adulthood, I had no idea who I was or what I wanted to be but I followed the program. I finished school with okay grades (a bout of glandular fever and debilitating fatigue put paid to top grades) and then I went off to uni, graduated, got a job, bought a house, and was entirely unfulfilled.

I was frustrated, angry, and didn’t know how to express my feelings. I didn’t know how to ask for help. Thankfully, a work colleague saw my struggle and stepped in. He was studying Traditional Chinese Medicine (TCM) and told me he was going to release the heat in my body. He gave me my first gua sha treatment (rubbing a ceramic spoon over the skin to cause micro-trauma and draw energy to that area – and release heat). It helped.

And so I discovered TCM, which I studied for some years. It clicked well with my Eastern philosophy interests and martial arts training (which I dabbled in until 2003 when I found Brazilian Jiu Jitsu). I was veraciously reading about Buddhism – especially Zen – mindfulness, Taoism, and anything by Alan Watts. I knew all the right words but I couldn’t live it.

At 27, I had what I call my Quarter Life Crisis. I quit my IT job, sold my house, packed my bags, and escaped to London. I just needed to get away. I’d been doing everything I had been told would make for a successful life and none of it was really working. Well, except for the woman I’d just met.

I spent 9 months living in London and travelling around Europe with Erica, who would become my wife in 2006. It was a time of total freedom. We lived day-to-day. We had fun. We connected and built the foundation of our wonderful marriage.

And then we came home, and everything turned back to the way it was. Well, mostly. I didn’t know what to do so I started a business as a personal trainer. That turned into a gym (one of the first CrossFit affiliates in Australia). I sold my share in 2013 and fell into business coaching gym owners. Again, on the outside, it all looked good. On the inside, I was still unsure and fearful.

At some point in the storm of owning these businesses, I had an epiphany (admittedly it took a dose of psilocybin and MDMA to breakthrough my rigid thinking). And I worked out that everything really was connected, that I was exactly where I need to be, and that everything was pretty damn awesome.

I learned to sit in silence, to investigate my own consciousness, to accept things as they are. I explored yoga, meditation, sensory deprivation, psychedelics, hypnosis, psychotherapy, holotropic breathwork, and more. I got a whole bunch of experience and qualifications.

And I finally worked out that not only do I now understand how to heal myself; I have the tools, the wisdom, and the passion to help others heal themselves.